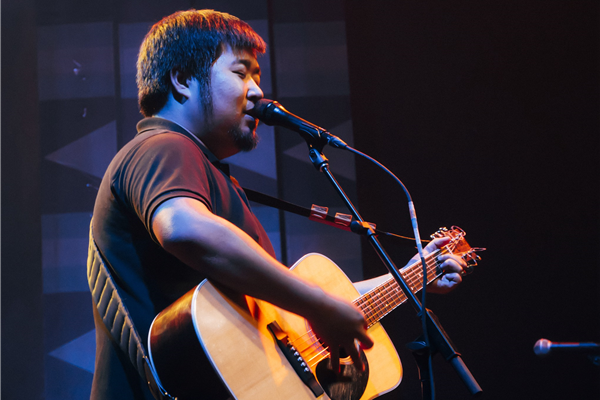 US-China Today chatted with two indie rock musicians, Song Dongye and the leader of the band Miserable Faith, Gao Hu, about their experience performing in America and the state of the Chinese music industry.

Competition for tickets to the recent Modern Sky Chinese indie music festival in Los Angeles proved fierce. Desperate posts for tickets clouded WeChat (微信) accounts ahead of the festival and even family of band members were left to fend for themselves. The wildly popular concert brought together the talents of the Chinese indie music scene, including acts such as solo artist Song Dongye (宋冬野) and the group Miserable Faith. Song, a popular singer-songwriter of Chinese folk music, began to write music in high school and has blossomed into the music scene’s poster boy. One of the most influential rock bands in China, Miserable Faith, regularly closes out the country’s biggest outdoor music festivals and headlined the event. US-China Today chatted with two of the performers, Song Dongye and the leader of Miserable Faith, Gao Hu (高虎), about their experience performing in America and the state of the Chinese music industry.

What do you feel is different about the Chinese and American music industries? How are you influenced by Western music?

Personally, I spend more time making my music rather than comparing the two industries. However, I do recognize that there is a difference in the music culture. We are quite inspired by Western music. I personally have been influenced by Nirvana and Metallica. I like heavy metal very much. And later, I also came to enjoy Bob Dylan. In China, Western music is passed down in the form of dakou cidai, which are specially marked, deeply discounted cassettes passed down from America to China. They were fundamental to the development of rock music in China because they were the major and often only source of foreign rock and pop music in China.

What has surprised you about performing and touring in the U.S.?

First, there were a lot of Chinese in the audiences, which exceeded my expectations. It brought a sense of familiarity and comfort during performances. We did not expect the concert’s ticket sales to be so high. Our Los Angeles concert sold out, which reflects the support that we have from our fans. An interesting anecdote is that members of our band had friends who wanted tickets, but unfortunately we weren’t able to find any. I believe that the full house we had for the concert inspires us to explore the future prospects of hosting more events, perhaps similar to the Modern Sky music festival.

As one of the earliest representative indie rock bands in China, what changes have you seen in the fast-developing Chinese music industry?

There are several indie rock bands preceding us, and we are privileged to be able to stand on their shoulders. Through doing international performances, we want to be the push and an inspiration for future Chinese artists to become more globalized.

Currently, Chinese mainstream and indie music are starting to intersect. The increasing popularity of indie music offers more opportunities in indie arts. We, as indie artists, must learn to still be ourselves despite the increased investment from others and business opportunities. There are many problems, such as the violation of copyrights, in the Chinese music industry that we cannot influence. Instead of using time to complain, we should focus on continuously workign on our music.

Has there been any issue of censorship with your music?

All music produced in China must go through screening to confirm its political and social appropriateness. For example, the song lyrics must be screened to avoid any double meaning. It is a process that musicians must experience and learn to tolerate in order to publish their works.

Have you ever encountered any instance of plagiarism with your sound or style? If so, how did you combat that?

There are too many instances of our music being put online without our permission and without payment. Although we are aware of that, we recognize that we need more time to improve this dire situation. After all, we are musicians, we should concentrate on perfecting our music rather than taking the time to go to court and argue about legal matters.

Are you optimistic about the future of Chinese music industry?

I am optimistic about the future of the Chinese music industry. As China continues to grow after basic needs such as food and health are fulfilled, the Chinese music industry also grows. For example, I have noted an increasing number of instrument shops in China. If there are increasing instrument sales, music making must also be growing in China.

Do you have anything to say to your fans?

I hope to travel around the world to meet my fans across several continents. The world is only so big, if I don’t travel everywhere with my music I will be very sorry. In Chinese, there is a Chinese proverb, “他乡遇故知”, meaning that it is very enjoyable to meet friends in distant lands. I am so fortunate that I can make so many wonderful people while touring around the United States. I feel privileged to be able to use music as a method to explore and meet new people.

What first inspired you to make music?

It was simply that I liked it. I have been sensitive to everything about music since I was young, and I especially enjoyed the songs that played when I watched TV series and Japanese anime. When I was young, I once told my parents that I wanted to learn music, but they didn’t agree.

What does the increasing popularity of your songs all around China mean to you personally?

It means that I earn more money, and not much more.

How do you think the rise of Chinese indie music has affected China’s music industry?

It’s definitely making it better. It’s like a hundred flowers in bloom. There are more people enjoying [the music], writing the music, and becoming involved in relevant careers. I think this is a very good sign of progress.

In the digital age, the music industry has experienced positive and negative side effects.

I know. However, I believe in China the only future for people making music is to become career musicians so that they can earn money and live better. More and more people in China are achieving this goal, and as a result, Chinese opinions toward the music industry have also changed. In the past, most people believed that making music was not a proper career plan, or it would not lead to a bright future. However, these ideas are changing and I think this is a successful beginning and a good base.

Were you influenced by Western music when making your own music? If yes, how?

Not really. Maybe it’s because my music is so personal. I think even if I spoke very good English, I wouldn’t really understand Western music since I’ve never lived [in the West] and I couldn’t feel its cultural influence on music composition. Therefore, if I don’t and won’t live here, why not let it go and stop digging into its (Western music) significance, which I do not consider that meaningful.

What do you think is the biggest problem in the Chinese music industry now? Are there any issues of copyright or plagiarism?

I think now in China everything is considered “Chinese-style,” but you can’t say that it’s bad. It might be good, and probably only those who live in China can know what the Chinese music industry is. I believe it’s impossible for anyone to predict the market, and there’s no one who is so wise as to predict what will happen to the Chinese music industry. But we will see. People usually try slowly and cautiously to look for and ultimately find a right way to develop the music industry, as did those in the United States and other Western countries. They were just faster and earlier than the Chinese.

The problems of copyright and plagiarism are serious, there isn’t a good solution yet. These problems happen almost every day. Rules and laws are not strict enough. But I think everything will become better, since our values are changing.

How is the box office of this concert so far? Did you expect this reaction from American fans or overseas Chinese?

[Laughing] The Chinese have occupied the world! The Chinese are everywhere, so I won’t blindly consider myself really popular. That’s not the real situation. [Our sales] are all thanks to the support our compatriots. I know that we still have a long way to go to realize the internationalization of the Chinese music.

What’s the significance for you about performing in the United States?

I’ve only been here several times, so I can’t say much about what I feel about this country. Overall there are many good aspects, and there are also places that I feel not as free as in China. I see it from different perspectives. Many people said that the United States is the best place, and I don’t think that’s really the case. Maybe we should see it critically and without bias.