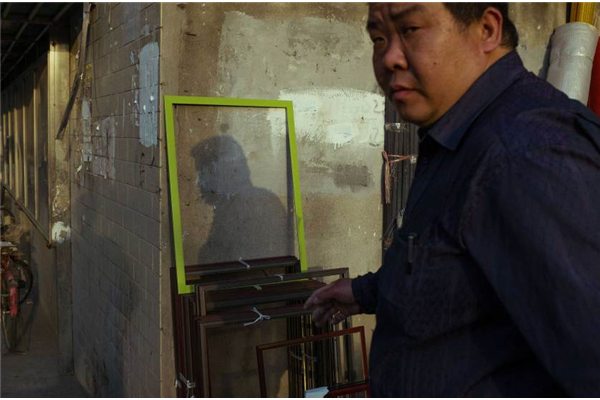 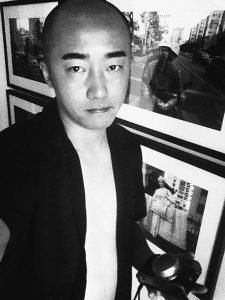 Chinese street photographer Tao Liu always ends his day in the same way. After working as a water-meter reader at a factory in Heifei, a third-tier industrial city in China, he pops in his headphones and begins photographing his seemingly nondescript surroundings. The self-taught street photographer centers his practice on a fixed area of urban Hefei, with about a 25-kilometer perimeter, to acquaint himself with the scenery. His shots run the gamut from children playing in piles of rubble to tromp l’oeil images of mannequins with missing heads and cheekily positioned ads. He wanders the area for four-and-a-half hours each day to the sounds of classical music and Eminem, taking pictures until 8 p.m. Until a few months ago, Liu was unknown for his photography outside of China, where he has become something of a viral sensation. However in November 2015, works by the street photographer were exhibited in Hamburg, Germany, bringing his work to a global audience. His witty images capture candid moments of street life and offer reflection on quickly modernizing Chinese society. US-China Today spoke with Liu in order to learn more about his creative process and how he manages to capture the perfect shot.

What inspired you to start your photography journey?

People have said that I have created great photography works, but I think it is photography that has created me. I am still working at a factory in Heifei, but ever since five years ago when I first picked up a camera, my life has changed.  Many photographers have the opportunities to travel to different places, but as for myself, I have little chance to leave the city that I have lived in since I retired from the military in Shanghai. I noticed that a lot of foreign photographers like to take pictures on the street, so I searched on the Internet for images of Heifei. Although there were many sophisticated images of the “big city,” there were rarely any results on the people dwelling here or moments of their lives. Then I thought to myself, the city I live in has millions of people. There are many fascinating stories of ordinary people happening every day. Since that realization, I started capturing these ordinary but unique moments on the street and posted the images on social media.

I think it’s my personal experiences that have inspired me to pursue photography. Before I began shooting, I felt like my life and work were falling into a fixed track. Everyday was very mundane and repetitive. Working in a factory made me feel that I was only a small component of a large machine. People around me all seemed to have similar pursuits and satisfactions. Maybe rebellion is in my nature. I would draw anime comic pictures during breaks at the factory.

The subjects and compositions of your photos are very diverse. Is there a unifying thread among your photographs? 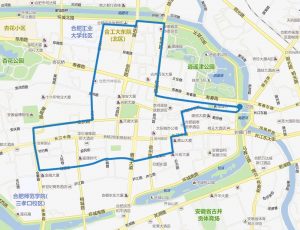 I think the present creative environment of China does not allow much space for street photographers like me. Many people who used to be passionate about photography are forced to abandon it due to pressures from life and social values. Although I take my pictures in the same district of a small city, I am able to connect it to the rest of the world. It makes me feel the world is close to me and is full of vitality. Sometimes it even makes me feel like a Japanese warrior. I took all my pictures in this area. (Pictured left) It is very small but abundant in stories.

Is there any particular photographer that has influenced your decision to start photographing?

There are several photographers that have influenced me significantly, including Japanese photographer Daidō Moriyama, French street photographer Robert Doisneau, Marc Riboud, and Henri Cartier-Bresson. I used to wonder why some of the greatest photographers would spend years, or even a lifetime, taking photos in the same city. I think styles of photography differ from artist to artist, but their collective creative spirit has inspired me greatly.

What is your secret to getting the perfectly timed shot?

Heifei is a third-tier city. We don’t have many foreigners here. The architecture is also not on par with first-tier cities like Beijing or Shanghai, and even our subway system is still under construction. There are many worn but bright billboards on the streets. So when I attempted to imitate the traditional style of city photography – the kind with exquisite backgrounds and elegant objects – I realized that this is not the style for my city. I consider myself a relatively sensitive and sentimental person who is attracted to the little candid and fleeting moments of life. My secret for shots are simple: be a patient and attentive observer, and always keep a sense of humor.

It is important to have the correct motives for photography. I am very genuine in my interest of street photographing and never thought about intentionally taking it to the commercial level. My “self-taught” process is simply wandering around in the same neighborhood for four-and-a-half hours every day after work, taking pictures until 8pm. As a street photographer, it is also important to constantly observe and reflect, which usually means less social time and more isolation. Too many things would disrupt the pace of photographing. For me, photography is simply a camera, a pair of headphones and some alone time in the busy city.

Your photos indirectly reference aspects of Chinese society, such as consumerism and the aging generation. Do you intend your images to have a social or political charge to them?

I once read a book called “Metaphors of the Street” written by Zheng Zhu, a professor at Fudan University School of Journalism. It successfully identifies the metaphorical nature of street photography. I think my works should be able to stimulate different feelings among different people. When looking at my pictures, some people would laugh, and some would express sorrow. Each of my images reflects my personal opinion on aspects of contemporary Chinese society, featuring mothers, children, guards, cleaners, farmers, etc. What I wish to accomplish through my photos is to initiate curiosity and reflection from my audience, as well as to present the faces of a third-tier city.

What is your favorite photo taken in China and why? 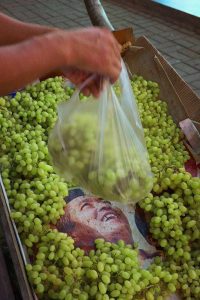 It is very difficult to say which one I like the most because they are all very important to me. If I had to choose one, I would pick this one. (Pictured right) Photography is my channel to the world beyond the boundaries of Heifei. Without it, I would have little interests in things happening in the world and would do the same work until retirement.

Your works were recently exhibited in Germany — a great accomplishment for any photographer, especially from a third-tier city in China. What was your feeling when you learned of the exhibition?

I am very proud of the exhibition. The experience still feels unreal to me. It allowed me to connect with the other side of the ocean in a way different from traveling. Although I have never been to Germany, I was able to make contact with the people from a strange world. I feel like I was standing quietly in the corner where my work was exhibited. This picture was put on the front page of the exhibition handbook.

A few days later at the farmer’s market, I bumped into Mr. He, the guy featured in the picture. He was sharpening his knife by his meat shop, and then he saw me standing there with my camera in my hands. “Don’t make me appear on ‘People’s Daily,’” he joked. I was very happy and showed him the picture, “This is you right?” I said proudly, “This photo was exhibited in Hamburg, Germany.” “Oh. Yes, it is me.” He said casually, and continued to focus on sharpening his knife.

There are many people like Mr. He. They are industrious at work but has little curiosity left for the world. I think when I become old I won’t feel the same way as they do because photography has changed me.

What are your plans for the future?

I look forward to publishing my first photography collection in 2016 with a Chinese publisher called LENS. I also wish to have the opportunity to travel to other parts of the world, such as visiting farmers’ markets and the streets of Europe. I want to know what life is like for people living in different countries rather than simply visiting the tourist attractions.