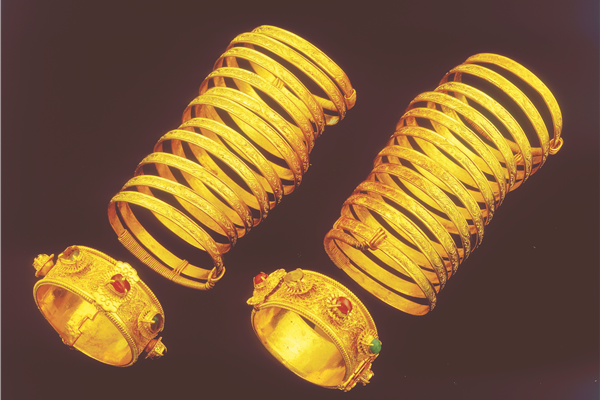 “Royal Taste: The Art of Princely Courts in Fifteenth-Century China,” an exhibition at the USC Pacific Asia Museum, provides audiences with a new understanding of Ming royalty.

With instances of under-cutting, back-stabbing and even murder, everyday Ming Dynasty (1368-1644) court life has a soap opera feel. Ming princes were feared by the emperors. To give the princes space and to minimize their ability to threaten the emperor’s hold on power, adult princes were sent to areas far from Beijing. Without permission from the capital, those princes could neither return nor participate in central political affairs. This strategy helped ensure the stability of the regime but also scattered important arts, culture and historical artifacts throughout the country. The Ming princes played a significant role in developing their respective regions. While people often focus on the cultural development of Beijing, they ignore the importance of the provincial areas of the Ming dynasty. The cultural artifacts of the emperor are important, but with recent archeological finds of 2001 historians also realized the importance of the princes’ provincial courts. Now, “Royal Taste: The Art of Princely Courts in Fifteenth-Century China,” an exhibition at the USC Pacific Asia Museum (PAM), provides audiences with a new understanding of Ming royalty. US-China Today spoke with Yeonsoo Chee, the assistant curator of USC PAM, in order to learn more about the significance of these princely courts and their importance today.

What does the “Royal Taste” exhibition reveal about Ming dynasty nobility?

This exhibition specifically focuses on the life of the princes in the provincial areas, not in Beijing, the capital. So far most art histories or research concentrated on the imperial families living in Beijing because the archeological materials and documents were available to us. This exhibition is especially important because of its tomb findings, in which several thousands of objects were excavated in 2001. We now have clear ideas about the lives of the princes who lived far from the Beijing area, so it really explains to us how the culture and society were spread out, and not just focused in Beijing.

The exhibition includes recent archaeological finds, how have these pieces changed the understanding of Ming China?

This is the first time some of these pieces have traveled to the US from China, what is the importance of this cultural exchange?

I think it opens a bigger, wider door to culture exchange between China and the United States because many of the objects are high-quality and considered national treasures in China. The Chinese government is so willing to share those objects with U.S. institutions. With increased sharing, now we can have more exhibitions, research interchange and exchange.

The exhibition originated at the Ringling Museum of Art, but the USC Pacific Asia Museum has added pieces from a private collector and from its own permanent collection. How do these pieces function together as a whole?

These pieces are all in the same time period that the exhibition represents: 15th and some of 16th century. There were some areas, three of the galleries of the tomb findings, that show the lifestyle and culture of the Ming princes and their concerns are very strong. The ceramics and the Tibetan Buddhism section were a little off in terms of the number of the objects, so those would be the areas that we could enhance and contribute from our collections. We focused on those areas and selected some of the ceramics that were not represented in that [original] exhibition.

Why highlight the Ming Dynasty with an exhibition?

The name Ming means the “great brightness” and also is a period of great pride in Chinese history. There is no doubt that the Ming Dynasty can be one of the most representative dynasties of Chinese civilization. There is [a lot of knowledge] surrounding the interactions and the trade with the other side of the world. Also Ming porcelain has been among the most well-known throughout the world. I think good materials can speak to a wider audience, not just the scholarly population, but also to the general public showing the beauty, wealth and diversity of the period.

Did you encounter any difficulties in the curation of the exhibition?

I think the installation was quite demanding. Installing a 1,000-pound stone object was more work than what we anticipated. We started with one crane but had to bring another one. And there were four art installers working together due to the shape of the object being round, and we also had to be mindful about the safety of the object and the installers as well. The small gold and jade objects are so delicate and more time was required than we anticipated. Since we are in Southern California, where earthquakes are an issue, every object needed a special mount to prepare for any seismic activity. Also, deciding how much information we want to include in the exhibition was a difficult task. So we used QR codes and an audio tour so that we don’t have to crowd the gallery with too much text.

How does an exhibition about ancient Chinese history relate to or influence our contemporary world?

You can already see a lot of connections from the 15th and 16th century materials. Gold objects already had such a sophisticated methodology, and we know that the technology of porcelain continued to develop through Chinese artistry. Also the blue-and-white wares and other porcelains have become very well-known. They also have a great influence on contemporary artists.

Before the exhibition we had a contemporary Asian ceramics exhibition for three Chinese artists who worked closely and all studied ceramic techniques in Jingdezhen. With this exhibition there is a great view to the past, along with a contemporary network of art and culture in every aspect.

The gold ingot displayed in the first gallery. It is relatively simple-looking, but it actually reveals a great deal about the exhibition theme. First, that object was gifted from the emperor to Lady Wei, who was consort to Prince Liang, so it was a marriage gift. It shows the very close relationship between Beijing, the imperial family and Prince Liang. Also because during the Ming Dynasty there was a great deal about reaching outside their immediate world, unlike the Qing Dynasty (1644-1911). They were building great relationships with neighboring countries like Korea, Vietnam and others. Not only through land routes, but also Emperor Yongle and Emperor Xuande sent out seven expeditions throughout the Indian Ocean. Through the Indian Ocean expeditions they not only brought knowledge about the Ming Dynasty to the world, but also they brought back the different objects, languages as well as cultures. And one of the things they brought back was the gold ingot. It also shows the Ming Dynasty’s great outreach to the other countries and also their opulent lifestyle–the gold ingot was made with 80% gold and there is inscription indicating where it was made. It is such a simple object but it says a lot. 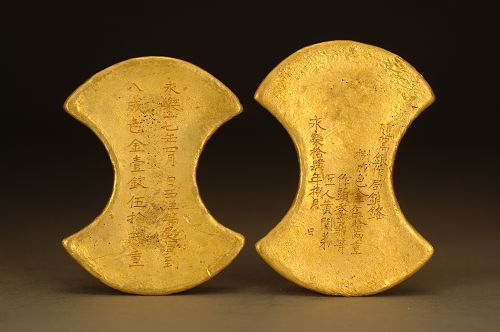