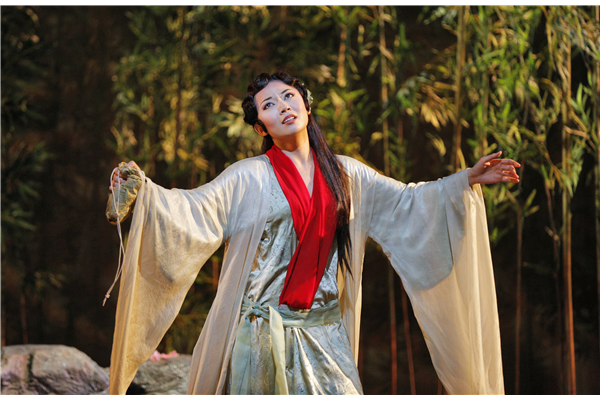 US-China Today spoke with the creative team behind the SF Opera adaption of Dream of the Red Chamber, a classic Chinese novel.

In the opera Dream of the Red Chamber, poetic ink paintings, faded paper lanterns, and delicate calligraphy transport the audience to ancient China, 300 years ago. Adopted from the classic Chinese novel with the same name, the opera features the painstaking efforts of the cast and creative team — including influential director Stan Lai, Oscar-winning designer Tim Yip, Grammy nominated composer Bright Sheng and Tony-award winner David Henry Hwang — in recreating this time period on the stage. The story, originally written by Xueqin Cao during the Qing dynasty, portrays the rise and decline of  two notable families, and centers around the love story of lead characters Baoyu, Daiyu and Baochai. To make the story (which is twice the length of “War and Peace”) more accessible to the American audience, the creative team made many bold, and sometimes controversial, changes to the original novel. US-China Today spoke with Lai, Yip and Sheng to discuss their creative decisions and behind-the-scenes stories. 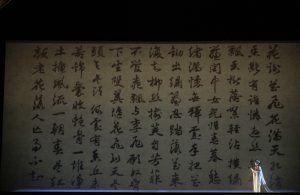 A scene from Dream of the Red Chamber. All photos courtesy of SF Opera

How accessible do you think this opera is to audiences in America?

Bright Sheng: We the creative team feel strongly that the audience in San Francisco received it well. Two examples: the tickets are virtually sold out within a week after the opening, and many American audience members, whom I assume do not know of the novel or the story, came to me after the show and told me how much they were emotionally moved by the story; many of them cried.

What has been the biggest challenge in bringing a traditional Chinese novel to a western audience?

BS: Making sure that a Western audience can follow the story clearly and does not get lost in the thick of Chinese culture, let alone the 18th Century Chinese aristocratic culture, or in this case, the Redology [the academic study of Cao Xueqin’s Dream of the Red Chamber, one of the Four Great Classical Novels of China] culture.

Stan Lai: Everything, practically! I learned from my experience at the Oregon Shakespeare Festival (my play was Secret Love in Peach Blossom Land) that a typical Western audience may not even know where China is, much less know about something as complex as Dream of the Red Chamber. So, on one hand we need to go easy on cultural interpretations, but on the other not sacrifice the beauty and depth of the novel… [Also] To accent the very Chinese perspectives — the Buddhist and Taoist philosophy behind the novel — as well as the details of the exquisite Chinese lifestyle in the Qing Dynasty aristocratic circles, while keeping the story and characters understandable to the audience. I think in the end, the focus on lost and impossible love, passion and art, life and death, helped us to successfully attain these goals. 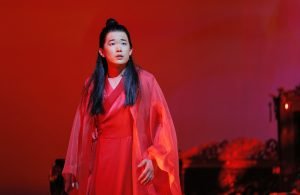 Yijie Shi as Bao Yu in Dream of the Red Chamber.

(To Tim Yip) You mentioned in a previous interview that red represents danger in western culture, while it is a sign of good luck in Chinese culture. You chose red for Jia Baoyu’s costume to indicate the conflicts of his fate. Is there anything else in the design that alluded to cultural differences?

TY: I think the main way I bring eastern and western cultures together was through the combination of traditional opera aesthetics and Chinese stories. There are huge differences between what is beautiful in terms of opera from the perspective of western and eastern cultures. In the eastern culture, we appreciate rich colors and its resonation with music. In western values, however, there is no resonation of color and music, but more in creating an atmosphere. Therefore, in the opera Dream of the Red Chamber, we adopted the western style where we focused on creating the atmosphere while blurring the details. In this way, we created a blurry area where western and eastern cultures depend on each other. The opera is built on the eastern aesthetic system with mutual lighting and pace, while adopting traditional western music. This is very interesting.

What was behind your decision making in changing or excluding elements from the original story?

TY: I think that originally there exists an appreciation and desire of eastern cultures in the western world, but it was lost throughout the years. If we can bring out the appreciation and desire again, then our job is easier. We have tried to explore the classic contents and perform in contemporary art forms. We experimented the combination of solid history background and bold innovation. I believe both eastern and western cultures appreciate the exploration like this.

(To Stan Lai) You have been really active in directing 30 plays and two operas in the past, and you also have your own performance workshop in Shanghai. What are your ultimate goals/ ambitions in performing arts?

SL: I feel very blessed and lucky to have accomplished what I have so far. If I can contribute to the cultural life of the society I am in, in any way I am very pleased. Recently I feel more and more that I can serve as a bridge between East and West, given my background. 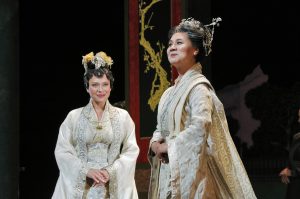 In what ways might The Dream of the Red Chamber increase visibility for Chinese actors and themes in performing arts?

SL: I think it was a major event in terms of visibility for Chinese and Asian artists on the world stage. San Francisco Opera made a bold choice (to America) and I believe we have shown the world what level of competence and aesthetics we are at.

(To Bright Sheng) Your music has been known for its fusion of eastern and western elements. What was your creative process for creating music for this opera?

BS: Fusion is a dirty word nowadays. However, as I have said often that I consider myself 100% Chinese and 100% American, my music should reflect that phenomenon, which I say in the most humble way — as I believe a true fusion should be coming from the bottom, not the surface, meaning one has to have a profound understanding of both cultures before [there is] even a slim possibility to come up with something organic.

(To Bright Sheng) In a recent interview you said you were fascinated by the rich content and vivid characters of the original novel. When you and Mr. Hwang worked on adopting the novel to an opera, how did you decide what elements of the novel to include?

BS: Opera does not take a complicated story, as it needs to leave room to express many of the meanings that words cannot express. So we decided to strip the story to a mere seven character bare-bone essence, to tell a Bao-Dai-Chai love triangle story. And the rest of the precious elements in the novel, such as political intrigues, family economic problems, etcetera are in the background. However, these backdrop elements are also important as they all contribute to the tragic ending of the love story.

What was it like to cooperate with each other? Can we expect more cooperation among the four of you in the future?

SL: Wonderful. David, Bright and I began at an early stage, and though I did not write the piece, as I usually do, they were very welcoming for me to share my ideas. Bright was meticulous in explaining all the musical nuances he had put in to further the action and I used them all to effect. Tim and I worked together on my 8 hour play A Dream Like a Dream and we had developed a creative rapport that was very conducive to the final product. We were often working long distance, meeting with whomever whenever two of us were in the same city.

BS: The four of us all consider ourselves Chinese. But our background and where we grew up are vastly different. What makes this collaboration interesting is that we came together because we love each other’s work and we all love the DRC novel. Furthermore, our artistic taste standard are similar, a crucial reason why we worked well together. 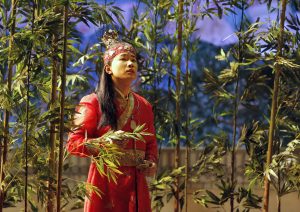 Will you make any changes to the opera when it shows next year in Hong Kong?

SL: Nothing major. But the chorus and dancers will be all local, so we will have an all Asian cast.

TY: I don’t think we will make huge changes, but we definitely want to pay more attention to details. We woul like to build more accurate visual effects.

BS: There is always room for improvements. I am for one a strong believer that nothing should be set in stone, and any form of performing art is a living, breathing thing which can take new thoughts with every opportunity.

How can we, as international students, deal with cultural differences more wisely?

TY: It takes time to experience and understand culture, so don’t be too anxious. Learn the western culture, ideas, and technology, but try to understand them from the eastern perspectives. You need to come up with something different from the context.