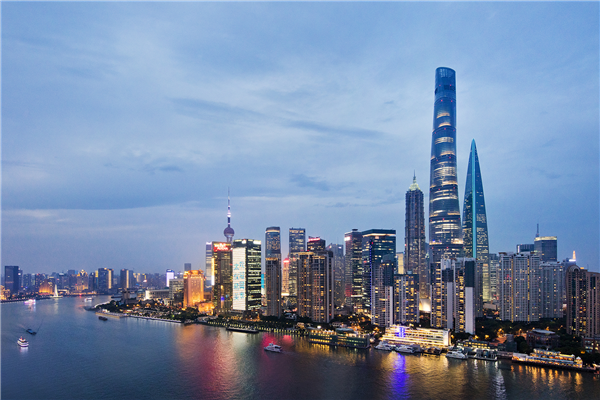 Q&A With Benjy Ward on Urban Planning in China

Benjy Ward shares his insight into sustainable urban planning in Shanghai, and the role of foreign architecture firms in China.

The American architecture firm Gensler designed the iconic twisted Shanghai Tower in 2006. Today it stands as the world’s second tallest building by height to architectural top. The Shanghai Tower, along with other sleek, futuristic skyscrapers including the Shanghai World Financial Center, nicknamed the “bottle opener” building, and the Oriental Pearl Tower, are some of Shanghai’s most iconic buildings in the city’s financial center. Although these towering buildings seem to pop up everyday in China, urban planners are still racing to keep up with urban growth and develop solutions to issues including overcrowding and a need for public green space. According to the World Bank, the Chinese urban population has reached 760 million, and according to the Economist, by the 2030s Chinese urban cities will be home to over 1 billion people. Gensler’s regional design leader Benjy Ward was formerly based in Shanghai and worked on projects related to urban planning and sustainable development. US-China Today spoke with Ward about issues of Chinese urban planning and sustainable means to fix these issues.

China has been through dramatic urbanization over the past 30 years. In what ways has current urban planning helped or hurt the development of China’s cities? 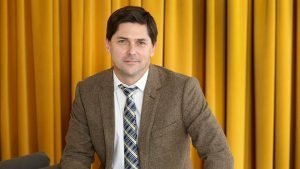 Urbanization in China is happening at quite a serious clip right now. There are 750 million people living in Chinese cities and by the 2030s, there will be a billion people. China is creating cities quite rapidly. Every year for the past 20 years, they’ve been urbanizing 20 million people a year, which is kind of interesting. Someone told me at a conference in China that they were creating one Canada every year. That means that when 20 people move to a city, it’s not just where they live. It is also where they shop, where they go to school and where they work. Every building you can imagine and all the infrastructure that go with it need to happen. So they must literally build cities out of nothing. It’s very rapid and so here come the problems. My real issue as an architect working in China is essentially that we will get these really wonderful sites, but we can only build on part of the site. And when you do that, it creates these very strange cities.

The problem is when you look up, the density goes away. Have you ever been to Pudong? You know that Pudong is very different from Puxi, where it’s cozy, it feels very European; older Chinese cities sort of feel like that. But because of the density here [in Pudong], it takes you 10 minutes to walk to the next building just to catch a cab. So it’s not necessarily built for people, and it’s not necessarily built for cabs because of the traffic. I read about this phenomenon in a book called Traffic in the City, and there’s an interesting quote: “Cities are the absence of physical space between people and companies. There’re proximity, density and closeness.” And that’s not at all what’s in China right now. They’re building cities that are totally disconnected, spaces that are disconnected from each other and communities that don’t connect. The Central Business District has office buildings so far apart that there’s no reason to walk into the cities. This is the way most Chinese have lived in cities for hundreds of years. It’s the same in Pudong or Guangzhou. There is something really wonderful about the fact that families live in the same areas and they use the streets as their living rooms, essentially. The problem is right now, city lanes, road ways and towers are far apart from each others and the social fabric is sort of broken down and not everyone knows each other any more.

What do you think of the new guidelines on urban planning released by China’s State Council that all “bizarre”or “not economical, functional, aesthetically pleasing or environmentally friendly” buildings will be forbidden? Do you think this guideline will thwart creativity in designing of these buildings or it can it be helpful to prevent waste of resources and other problems?

I think the new platform will be really great for China. This is an English translation of some parts of it. ‘Improve urban planning, improve public participation. Focus on city characters and ecological system… Improving urban architecture qualities, improving public services, optimizing road network.’ ‘Gate communities will never be allowed,’ so that’s huge. All of these are great.

And I think a lot of buildings are built in China because they want to do something crazy and make some kind of formal gestures. Some of them are quite beautiful, but a lot of them aren’t necessary functional. When there’s a downturn in China and they haven’t had a recession in the past 35 years, unfortunately they will have real problems leasing the many buildings that are not that useful. Many of these crazy buildings aren’t going to be successful from a real estate standpoint. 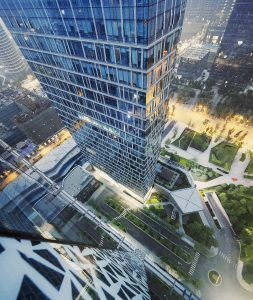 View from the International Financial Center in Shanghai. Courtesy of Gensler

Can you talk about your work on Poppy Seed and how it can be applied to Chinese urban planning?

We developed Poppy Seed in Shanghai and then finished developing it in Chicago. The idea is that people can find really interesting places in cities and put them up online, to take those lost, forgotten spaces in cities and connect them to one another either by holding events there or building something interesting to connect parts and pieces to the cities. It’s a cool mechanism to connect people around the cities.

Do you think it can be applied in China?

Yes. The whole story behind it is that we were looking for a way to activate different areas around Shanghai in those really old areas that no one knows about. And we thought it would be cool if we told people more about these interesting areas, started to activate them and do events around them. And everyone has mobile now and that’s why we started to create the app. So it’s very relevant to China.

To be honest with you, since Xi Jinping’s government has come into place, I think they are a little bit more nationalistic than Hu Jintao’s. Unfortunately, it’s becoming less friendly for people (foreigners] to set up shops in China. From a design standpoint, it’s too bad. One thing wonderful about Shanghai is that anyone can go there and do anything. It looks like the Chinese government invited the world in and said, “Give all your great ideas,” and now they are slowly kind of kicking us out and using more Chinese architects.