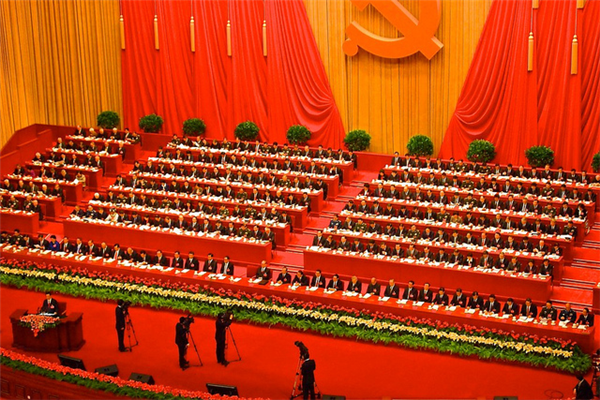 Where is the Chinese Hillary Clinton? Q&A with Julie Broussard

Julie Broussard of UN Women China discusses the state of female political representation at lower and higher levels in China.

This October, President Xi Jinping revealed his lineup for the seven-member Chinese Politburo Standing Committee, the highest governing body of China. While fierce debate rages regarding which of the candidates will go on to succeed Xi as China’s next President, one fact remains certain: it will not be a woman. Since the People’s Republic of China was founded in 1949, no woman has ever served as President or Standing Committee Member. Lower down, the 25-member Politburo only includes one woman. While representation may be poor in higher echelons of government, many Chinese women have long held leadership positions in lower levels of government. US-China Today spoke with Julie Broussard of the United Nations Women regarding female representation in Chinese government. As the country program manager of UN Women China since 2009, Broussard has overseen a myriad of projects aimed at equalizing social, economic and political playing fields for Chinese women, like the Enhancing Women’s Political Participation Program. 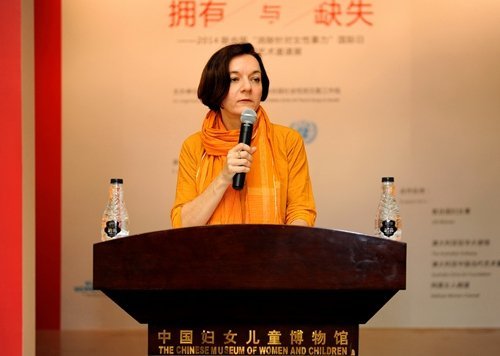 It’s not too bad in the lower levels. If I am not mistaken, the percentage of women in village committees is around 24% now. But you’re correct in noting that the higher you go, the fewer women you see in Chinese governmental institutions. Unfortunately for the recently elected, it’s the Standing Committee of the CPC [Communist Party of China]. All seven members are men, and we’ve never seen any woman in that political body.
Starting in the 1950s, China did manage to very quickly increase the number of women in government. From the 1950s to the 1970s, China went from single digit to around 22-23% of women in the NPC [National People’s Congress] and corresponding levels of government. But in comparison to the rest of the world, China was way ahead of the curve.
Since the 1970s, the percentage of women in the National People’s Congress has been above the world average for women in the lower house of parliament, and this data is tracked by the Interparliamentarian Union. However, if we don’t see that percentage increase in the next election of the NPC, then China might fall below the world average. So, in terms of comparison to the rest of the world, it’s sort of a sad fact that China has actually been doing pretty well because the rest of the world had so much catching-up to do.
Regarding these women in the lower levels of government, how much political influence do they wield? Are they akin to village leaders or are they actually voting on policies that impact the macro-governance of China? 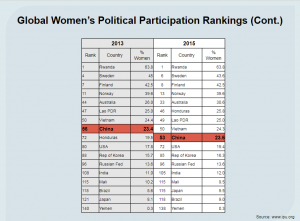 Well, it’s a mix of both. In the past, Chinese law said that there should at least be one woman member in village committees. Historically, that position was often sort of a token Women’s Federation representative having authority to overlook women’s issues in the village, and that in reality meant responsibility for helping to enforce the family planning policy. However, that’s rapidly changing and we’re seeing a lot of village committees that are electing more women, and electing women to be 村长 “cūnzhăng,” the main village head. When I was researching in Gansu Province in the village, the village head, the cūnzhăng, was a woman. This is a trend we’re seeing around China: the increase of women in village committees. These folk regulations had a lot of influence on actual village life, in terms of when it came down to a land allocation and other issues that really mattered to people, or if, for example, some of the land belonging to the village members was taken up by the government for development, then what was the compensation, and how would the compensation get divided among villagers. So the potential for women to influence issues within their villages is actually quite a lot.
How seriously are the Chinese government’s constitutional commitments to gender equality taken?
My observation is that actually these constitutional commitments are taken quite seriously. The issue is not whether they’re taken seriously. The issue is that there’s a widespread perception that China’s doing very well on gender equality. I’ve heard governmental officials say during meetings that there are no gender gaps in China. They say, “Oh well you know my wife manages our household budget, and so that means she has more authority than me in the household.” Well that might be true, but managing a household budget is unpaid work. And unpaid work burden falls more on women in this country than on men. Also, the authority does not extend outside of the household necessarily. The old saying is “男主外，女主内” “Nán  zhǔ  wài,  nǚ  zhǔ  nèi.” Men are responsible for external affairs and women are responsible for the internal, meaning the household. It’s mainly a lack of awareness that gender equality means a lot more than “women have the right to work” or “women have the right to birth control.”
Do you think that with the increase of women in high-level positions, due to their greater educational background, China will attain greater clarity in what true gender equality is when it comes to politics and business?
I’m optimistic so I’ll say yes. I do believe that… if there is a momentum and enough well-educated both women and men. However, I don’t want to minimize the importance of traditional norms being a weight on the other end holding the country back. A study conducted by the UN Institute for Social Development Research found that on average Chinese women are spending almost three times more time on unpaid work than men are. And the unpaid work is that care-burden, that is the household cleaning, child care, elder care, shopping for the family. What this really comes down to is that that burden is affecting the career choices women make for themselves, and it also affects how employers perceive women, whether they feel she will be fully committed to the job, whether they think she will be available for a more demanding position that requires more travel.
Regarding the Enhancing Women’s Political Participation Programme, run by the China Women’s Federation and funded by the UN Women’s Fund for Gender Equality, which ended some time ago, what are your views on the successes or failures of this program?
Basically, we were happy with the overall result of the program. It ended in December 2015. Among the results, there was a notable increase in the number of women in the village committees. But we didn’t see big gains at the higher levels, so the program was not able to affect the national level. At the village level, it is the only level in China where there really are free elections, in which who is going to end up with the position is not decided in advance. At the higher levels of China, although they go through the motions of an election, everybody understands that those are appointed positions.
What do you think the UN can do regarding female representation, not just in upper levels of Chinese government, but upper levels of Chinese business and infrastructure as well?
Right now, we are focusing on women’s leadership in the private sector. There are several reasons for that. The main reason is that in the Enhancing Women’s Political Participation Program that we discussed earlier, one of the findings was that there is a connection between women’s economic empowerment and women’s leadership. So, when women are successful economically as local businesspeople or other economic roles, they are more likely to be elected into government positions. And we feel that it is an important connection that we want to strengthen. So, we are working with the private sector through our New Women’s Economic Empowerment Program to encourage women leadership and the empowerment at the local level of women entrepreneurs as well. We believe that an increase of women’s leadership in the business world will have an effect on governance.
One thing is that China did make a commitment to gender equality globally. I think what we’d like to see more of is China making explicit connections between economic growth and the role of women (in terms of its own successful economic growth, a lot of which is attributable to women and their strong participation in the labor force here). And then, that should be a prerequisite for any other country’s path for economic growth. We would like to see a little more articulation of that in China’s foreign policy.