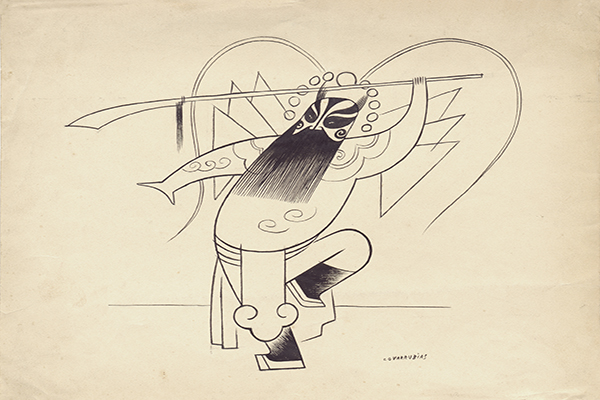 Zheng has curated “The Winds from Fusang,” focusing on Mexico’s artistic influence in China. The exhibition is on view through June 10 at the USC Pacific-Asia Museum.

After a visit to a Mexican art show in Beijing in 1956, curator Zheng Shengtian, 18 at the time, dreamed of traveling to Mexico to learn more about the work he saw. The Cultural Revolution continued until 1982 and prevented him from leaving China. He later learned that the art show he saw was perhaps the first cultural dialogue between Mexican and Chinese artists. China was previously closed to outside influence, however Mexico’s political history and ideology was seen as relevant to China’s leadership. The two countries, Zheng says, were “comrades” and influenced each other. Mexican artists including Diego Rivera and Siquiros Orosco were known to Chinese artists. Zheng became determined to curate a show to share this facet of history with the world, ultimately working with the USC Pacific Asia Museum in association with the Pacific Standard Time initiative to create “The Winds from Fusang.” The exhibit is open through June 10, 2018. US-China Today sat down with Zheng to learn more about the artistic relationship between China and Mexico, and the importance of the exhibition. 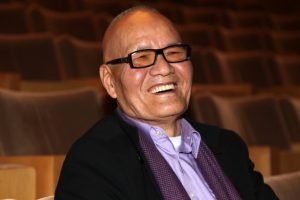 What was your creative process in selecting the work in “The Winds from Fusang”? How did the project come about?

It took half a century. I started to get interested in Mexican art when I was a student in a college. During that time I had a chance to see the first Mexican art show in Beijing in 1956. My schoolmates and I were all very fascinated with Mexican arts show in China. It was always a dream of mine to go to Mexico to see the original work but it was not possible until the end of the Cultural Revolution. At the end of the revolution, I had a chance to go to the U.S. to study. In 1982, I took a trip to Mexico, spending two weeks there, visiting many historical side to museums, galleries, and also meeting several Mexican artists who visited China in the 1950s or their work exhibit in China in 1950s. We understood the importance of culture exchange during the 1950s. China was closed, but then suddenly there was a huge Mexican art show that came to China.

Why has the influence of Mexico in Chinese art previously been overlooked?

In the west, scholars are mostly still concentrated on a Euro-American Centric kind of ideology. In China, they also only looked at the U.S. or Europe. They thought that that’s important exchange to talk about this. But during the change of the century from 20th to 21st century, I think most scholars realized that the kind of a multi-layered narrative is the true history. Not that just the very simple light, it just a one to one, west to east, but that was a lot of layers and that those kind of a dialect from time to time. Probably maybe even more important than official history, the official history in China.

In China, very few scholar talk about Mexico because the officials history narrative was China and the Soviet Union in the 1950s. When I was students, we all learned about the social realist style of chinese art scene. You have to do every medium, like a brush painting, oil painting or print making. They all have to follow this. A realistic style. You could not have a distortion off to form a good abstract. You could not change the color. At that time it was very strict, like say if you wore black clothes, I had to paint you in the black cloth. So in the history class, they did not want to talk about anything else besides Soviet socialist realism. So we learned a lot about Russian artists, but then nobody knew anything about the Picasso or Monet. After the Cultural Revolution, especially in 1990s, people looked back to the history that the official narrative of the history was not true because at that time there was a lot of diversity. Not only socialism.

Miguel Covarrubias spent time working in Shanghai in the 1930s, how did his aesthetic influence Chinese art of the time? Can you share some of the specific ways this arose in Chinese artists’ works? 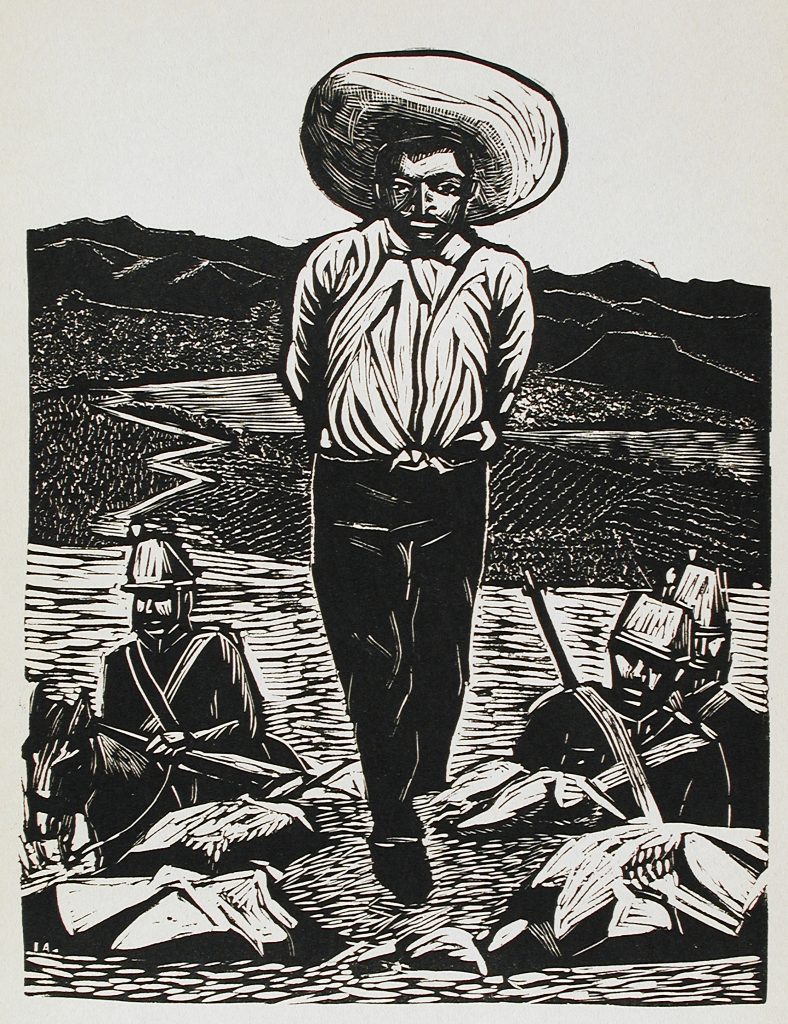 We found that he was the first Mexican artist who physically visited China. Although his stay was short, probably less than a month, his influence lasts very long. The reason was at that time in early 1930s in China, especially in Shanghai, there was a kind of blooming industry of publications and pictorial magazines. They needed a lot of artists to work for the illustration, cartoons and picture stories. Many young artists got involved with those publications during that time. When Covarrubias came to China, he came at the right time and the right place because he had experience as an art editor to Vanity Fair in New York for 10 years. His works were already familiar to those Chinese artists because they bought the magazines. When he came to Shanghai in person, it was a great opportunity. When the artists met him, they immediately fell in love with him. They spent all the time with him, almost every day to ask questions and to learn. They even traveled with him. Even just for short time, it was a big impact on their career.

Ye Qianyu was a professor of Central Academy of Fine Arts and the best painter in China in 20th century. He always remembered his meeting with Covarrubias. It changed his life because Covarrubias told him he should take the sketchbook with him. When you traveled or went out, you should sketch. That is the way you will learn and capture the things you can use for work. Qianyu said it was a very important advice to him. Before that he took a picture or painted from memory, but never sketched. From Covarrubias, he learned to sketch. Then he became, even until now, considered the best sketching artist in China. We showed five pieces of early sketches, but in Chinese museums there are thousands of sketches. He also taught a lot of students how to sketch.

How were techniques exhibited by Covarrubias different from artists he encountered in China?

Mainly the style. He used very simple line lies. He had a great sense of distortion, exaggeration of the form of the image. I think that gave a very good example for Chinese artists to learn from their own Chinese tradition because in the history of Chinese, illustrations, brush painting, were realistic than symbolic. If you compare Zhang Guangyu and Covarrubias, you can see the similarity. They took directly from Covarrubias, but they made Chinese versions of it. I will give you two examples. Covarrubias created a cover for his magazine in New York. He would paint this drawing or color the cartoon in magazine for the cover for fun and interesting. Put two people together. This imaginative style was very quickly taken by Zhang Guangyu. He did the same thing in Chinese magazine using Chinese characteristics. Other formats they took from Covarrubias was a cartoon style. In 1933, Covarrubias published a huge cartoon in Vanity Fair called a ‘Film Star in Malibu beach’ with male and female film stars in 1930s in swimming suit on the beach. It was very interesting because they put all the things, figures together so people could recognize them in a funny kind of style. Several months after Vanity Fair published the cartoon, Chinese magazines started to have Chinese film stars in Shanghai and many artists started to use this cartoon style that lasted a long time until the Cultural Revolution. Even during that time, Chinese artists still did this.

Can you elaborate on the meaning of Fusang (the ancient name referring to the shores of an “Eastern Ocean” which some scholars believe to be today’s Mexico) as there is some speculation it might refer to Mexico?

I would say we use this name not a really as a historical term, but more like a literal term. It means like in the literature, Chinese used Fusang to express the idea of this land which is far away from China in the East. There are several places which the historians argued where Fusang is because 1500 to 1600 years ago there was a monk named Hui Shen. He traveled from China to the east by boat, then came back with a lot of stories. In one book that recorded his story, he described a land he called Fusang. Actually, Fusang is the name of a tree. Some historians believed it was a huge cactus, not a tree because according to his description, it had a juice. Also the lifestyle and living conditions, everything was very similar to what Mexican historians found out during that time of Mexico, so many historians in China and Europe believed Fusang was Mexico. Some other scholars argued that he did not travel that long, so Fusang was not Mexico, but Japan. It is a very interesting discussion because nobody can really prove what or where it is.

How might museums examine other influences of Chinese art with future exhibitions? 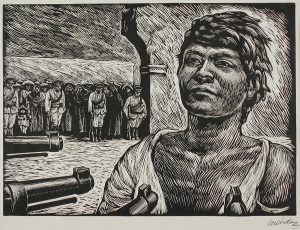 You know, actually this is my third exhibition in the series I have done in last 10 to 15 years. I began with my interesting contemporary art. In 1990s people started to talk about contemporary Chinese art. People outside of China started to research or discuss about and where it came from. I, myself, I had my own experience. I do not agree with some scholars that contemporary Chinese art only began after the cultural revolution in late 1980s. They believe before that China was totally closed. There was only political propaganda there. After China opened door in 1987, 1988. Then suddenly the western influence came. Chinese artists had a chance to see contemporary modern art. So then they could create a new art. So then Chinese contemporary art began at that time. Many scholars believe that this was the origin of Chinese art. I disagreed. I thought it would be more complicated and also it probably had to go back to a much earlier to find the source of contemporary chinese art. So I started to collect the material and the curated a show to reflect my point of view.

What might future curators uncover about the Mexico-China artistic relationship?

I’m very excited to see some young scholars now. There is a lot of things you need to research like Mexico alone. There is probably a dozen of artists that visited China since the 1950s, 1960s. Every artist, their experience, their journey to China should be examined. Any written material about their visit or their own diary or some kind of newspaper report about them and their own artwork. I think that if some young scholars that have been spending time, they could find a lot about it. I myself do not speak or read Spanish. I believe there are a lot of the materials in Mexico we should find out and then translate into English or Chinese. I know a Mexican scholar, who has the master degree from China. Her paper was about this same Mexican and Chinese exchange and now she is a PhD candidate in University of Pittsburgh. She is probably doing some very good research in this direction. Probably in the future, we can see more a result of this kind of research, then we will have a complete picture of the scale of this culture exchange, and how much the impact was on the cultural development in both countries.