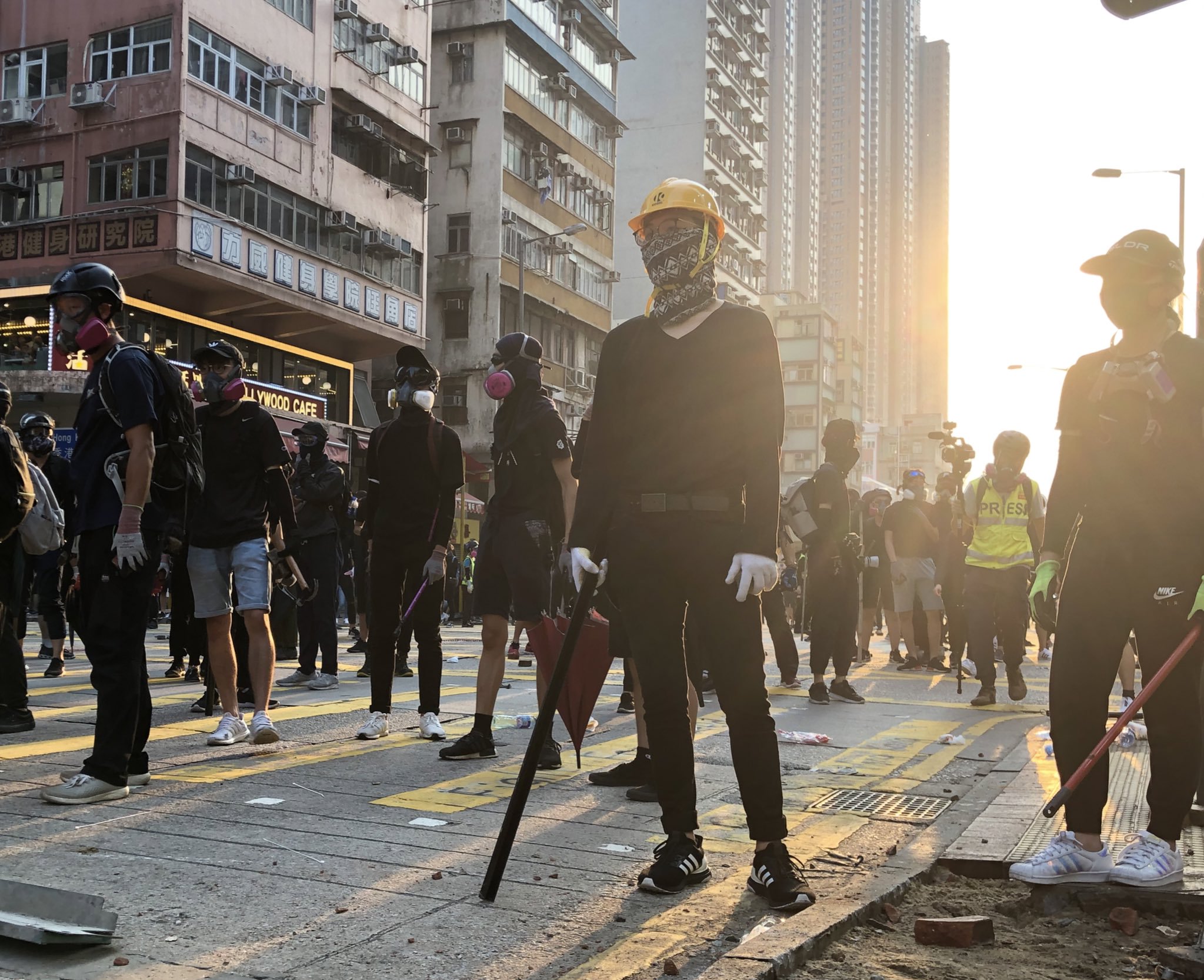 By Aozora ItoDecember 7, 2019 No Comments 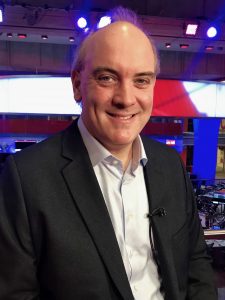 “The government has pushed the police into the front line as the only interface between the public and the authorities,” says Antony Dapiran.

US-China Today spoke with Antony Dapiran on the escalating violence in Hong Kong. Dapiran is a Hong Kong-based lawyer, writer, photographer and the author of City of Protest: A Recent History of Dissent in Hong Kong (2017). He has resided in Hong Kong and Beijing for almost 20 years. His views have appeared in The Guardian, The Atlantic, The Wall Street Journal and CNN, to name a few.

How does violence by the police today differ from the 2014 Umbrella Movement? Also, how does police violence differ from June of this year to today?

Certainly, in terms of absolute levels, the levels of police violence now is much higher than 2014. When you think back to 2014, there was only tear gas fired on one day and that was the first day of the Umbrella Movement, 28th of September 2014. That itself was notable in Hong Kong at the time and that led to huge numbers of people coming out onto the streets in reaction and anger at that. It was seen as a shocking thing.

This time around, we have tear gas every single weekend. [The police have used tear gas] every single weekend but one for at least three months or so. Tear gas is just a common occurrence now in Hong Kong and the police have escalated the other tools that they’re using, none of which were seen in the Umbrella Movement: rubber bullets, baton rounds, water cannons, sponge grenades, all these things that weren’t used at all in the Umbrella Movement.

In terms of the absolute level of police violence, all that has accelerated since June. In June, they only used tear gas and a few rubber bullets but not many. The most notable thing they’ve introduced [are] water cannon vehicles, and you’ve seen live ammunition for the first time as well.

You mentioned that both the police violence and protester violence are reactions to the other. How has protesters’ violence changed from 2014?

Back in 2014, it’s fair to say that the protesters were completely peaceful. They didn’t use any form of violence, whether against people or property, at all. This time around, the protesters themselves are using increased levels of violence.

The first notable act of vandalism was a break-in to the Central Government Liaison Office in July. [There has been] vandalism of [mainland] Chinese-related stores, bank branches and businesses. Protesters have been throwing rocks and bricks, and using Molotov cocktails very extensively in the last month or two.

There’s been an upward spiraling cycle of reactions between protesters and police. In each case, one side sees what the other is doing and feels they need to respond. 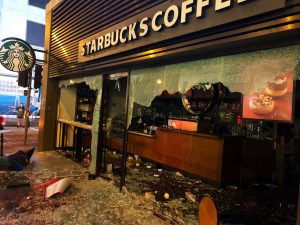 While the storefront of this pro-Beijing business in Shueng Wan was trashed, it had not been looted; accessories and even snacks were untouched. Image captured on November 2, 2019.

What do you make of the Hong Kong government’s engagement in this conflict?

It’s not only that the government is not responding to the protesters’ demands, but they’re not engaging the protesters at all. The government has basically disappeared from Hong Kong for the last couple of months. Government spokespeople have made appearances at one press conference every week, where they’ve said that they condemn the violence and that’s about it.

People are not feeling that they’re being engaged by the government. The government has pushed the police into the front line as the only interface between the public and the authorities. A lot of the violence you’re seeing on the protester side is almost a frustrated cry for attention. What do we have to do to get the government to pay attention? What they’ve discovered was when they vandalized LegCo and attacked the Central Government Liaison, [the government suddenly] started taking notice and responded to some of their demands.

In a recent survey by Professor Francis Lee of the Chinese University of Hong Kong, it was shown that only about 40 percent of public respondents agreed that protesters have used excessive force. The survey shows that the public have consistently viewed the police as more violent and abusive. How is violence perceived by those in Hong Kong?

I think the general public’s perception of the violence on the protesters’ side has been that: “Yeah, we wouldn’t necessarily do it ourselves or agree with everything they’re doing, but we understand the frustration and anger that’s driving it.” We sympathize with the cause and that’s why we haven’t seen more of the public turn against the protesters because of their violence.

On the police side, there have been many examples of police behaving badly and using excessive force. I think that has strongly turned public opinion against the police. It seems that they’re often making bad decisions in the way they handle things, and the public isn’t happy with that.

How has technology affected perceptions of the protests and the police?

Technology is really key in the way that the protesters have organized themselves and the way that they spread their messages. They use technology extremely adeptly through social media like Facebook, Instagram, Twitter, online forums and creating online memes. In terms of how police violence is perceived, the protesters are very good at packaging the examples of that and distributing it. So you get a lot of online videos of police abuse packaged into clips circulated on Facebook or through online forums.

Certainly the perceptions are shaped by the way that protesters use technology. It’s interesting that the police themselves are pretty bad at it. There was one example, quite a few months ago now, where the police tried to create their own viral video of protester violence, but it didn’t go down very well. It was nowhere near as well-made as the ones that all the protesters make.

It’s interesting how tech-savvy these protesters are has really helped them spread their messages widely. It’s not just in Hong Kong, but internationally as well.

There’s a lot of speculations but not a lot of hard evidence. Certainly, the police regularly film the crowds; AI and facial recognition tech could help them identify people in the crowds for arrest. There haven’t been any concrete cases of examples where the police have used this technology to make an arrest.

Similarly, the so-called “smart lamp posts,” again, are mainly speculation. These lamp posts have various sensors in them to collect roadside pollution measurements and traffic flow. They weren’t intended to be tracking people, as I understand it. The government has said that the smart lamp posts don’t have facial recognition cameras in them.

On the police side, it still looks, at least from the outside, that they’re using fairly traditional technology and methods. 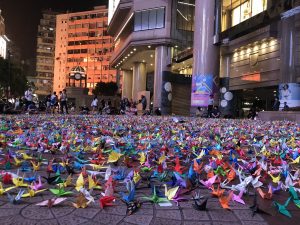 A block away from police clashes with protesters, a peaceful protest took place outside of Times Square Mall on Sept. 29.

Younger people who hadn’t participated in the 2014 Umbrella Movement are being drawn into today’s protests. What is causing the increased participation of young people?

It’s clear that one of the main things driving the protests is anxiety about the future and what will happen to Hong Kong as we get closer to 2047 when the rights of freedom will no longer be guaranteed under the Basic Law. People who are already in their 40s and 50s aren’t that worried about what’s going to happen in 30 years, but if you’re a teenager, you’re going to be in your 40s. You’re naturally going to worry about the future much more than the older generation.

Also, a lot of the younger generation of people that grew up in Hong Kong are post-1997. They’re no longer with the identity of being a British colony, but have an increasing sense that Hong Kong is a distinct place from the rest of China. They want to retain that identity and the specialness of Hong Kong as a unique place.

Do you feel that the unrest in Hong Kong will end their reign as one of the best places to do business?

I don’t think the business impact in terms of Hong Kong as a place for foreign companies to do business is going to be very big. There’s been a big impact on businesses that face retail consumers: hotels, restaurants and luxury shops. All those things have been hit because visitor numbers are down. Things like financial institutions and trading houses haven’t really been affected.

That’s on the threat as a result of what’s being exposed by the way we see the Hong Kong government responding or failing to respond to the protests.